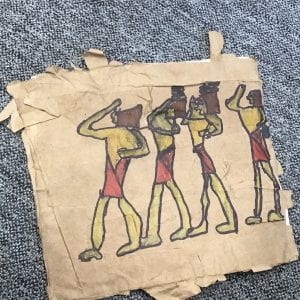 In the year 2545 BC there were four peasants named Horus, Isis, Maat, and Aten. All four of them lived in Memphis. They worked as hard as Bill Gates, doing what they were supposed to. One day they were called by King Khafre. As they approached they were bewildered.

“What?” said Isis and Aten excitedly.

“Since you all are adventurous, I thought maybe you can do an expedition to Upper Egypt to find some gold. You can also explore other things while you are there.” said King Kafre.

Horus, Isis, and Maat wanted to do it, but then Aten got scared and didn’t know if he wanted to go. Eventually the peasants decided to let Aten discuss everything that they would do in the expedition. Aten accepted. Aten said, “ I’ll do it but I have a feeling this expedition is going to take 1000 years.”

King Kafre said, “ All right then, tomorrow leave as early as you can.”

The peasants woke up at the crack of dawn. They left their mud-brick houses and began their journey on foot. They carried their food on their head like somebody poor would. As they promised, the peasants let Aten decide where to go, and the others followed.

On the fourth day of their journey, danger struck the peasants. There was a storm coming their way. The peasants were brave and determined to not stop.

“We can fight through this storm.” said Maat.

“Yes we can.” replied the other peasants.

So the peasants continued through the storm with difficulty like planting crops. All of a sudden there was a man coming towards them. He was also an Egyptian. When he came closer it became clear to the peasants that he was a scribe.

“My name is Amun.” said the scribe. “As you can see we are in a storm right now. So I’ll teach you how to tackle a storm.”

“All right.” said the peasants.

Amun taught the peasants what to wear during a storm, how to take shelter to stay safe and things like that. The peasants thanked him. After his lessons, the peasants took rest for the fourth time in their expedition.

Finally the peasants reached Upper Egypt. The entire day they went by exploring. There were small villages in this area and people looked similar in looks to those in Memphis. While Isis was goofing around he tripped and something hit his right foot. And he sat down to check and to his surprise it was a tiny, sharp piece of gold.

“Looks like we hit our jackpot!” said Horus. They started digging with the tools they had carried and found some small pieces of gold scattered. They started collecting them.

“I can not believe we are doing this.” said Aten.

After successfully exploring Upper Egypt, the peasants were home back in Memphis. There was an instance where it was raining cats and dogs but that was it in their journey back home. They went to King Khafre and he was so excited about what the peasants had done.

“You can do this type of expedition a million times, great job!” said King Khafre.

“Thank you.” replied the peasants.

They went back to their mud-brick house and all they could think about was what they had accomplished.

Welcome to your brand new blog at Edublogs!

To get started, simply visit your blog’s dashboard, edit or delete this post and check out all the other options available to you.

We can walk you through step-by-step in our guide to getting started with your blog.